Signal studios’ hack-and-slash hybrid was recently offered up to select 360 owners in a wide ranging beta test of sorts.  Needless to say, the game is certainly one of the more dazzling and addictive free-to-play titles being offered up by publisher / distributor Microsoft Studios.  Overall, the game handles like a refined “button masher” yet with all the additional perks, spell-casting, weapons, armor, runes, character building, and upgrades, the gameplay can become surprisingly “deep” to say the least.

Sure, there is quite a bit of repetition inherent in the basic structure of the game itself, but this isn’t necessarily a bad thing.   In fact, it’s somewhat refreshing to regularly encounter swaths of enemies you’re already familiar with because new baddies may suddenly emerge at any given time and force you to change up your tactics.  Of course if you’ve been regularly upgrading and harvesting souls to purchase new gear there shouldn’t be too many problems to contend with. 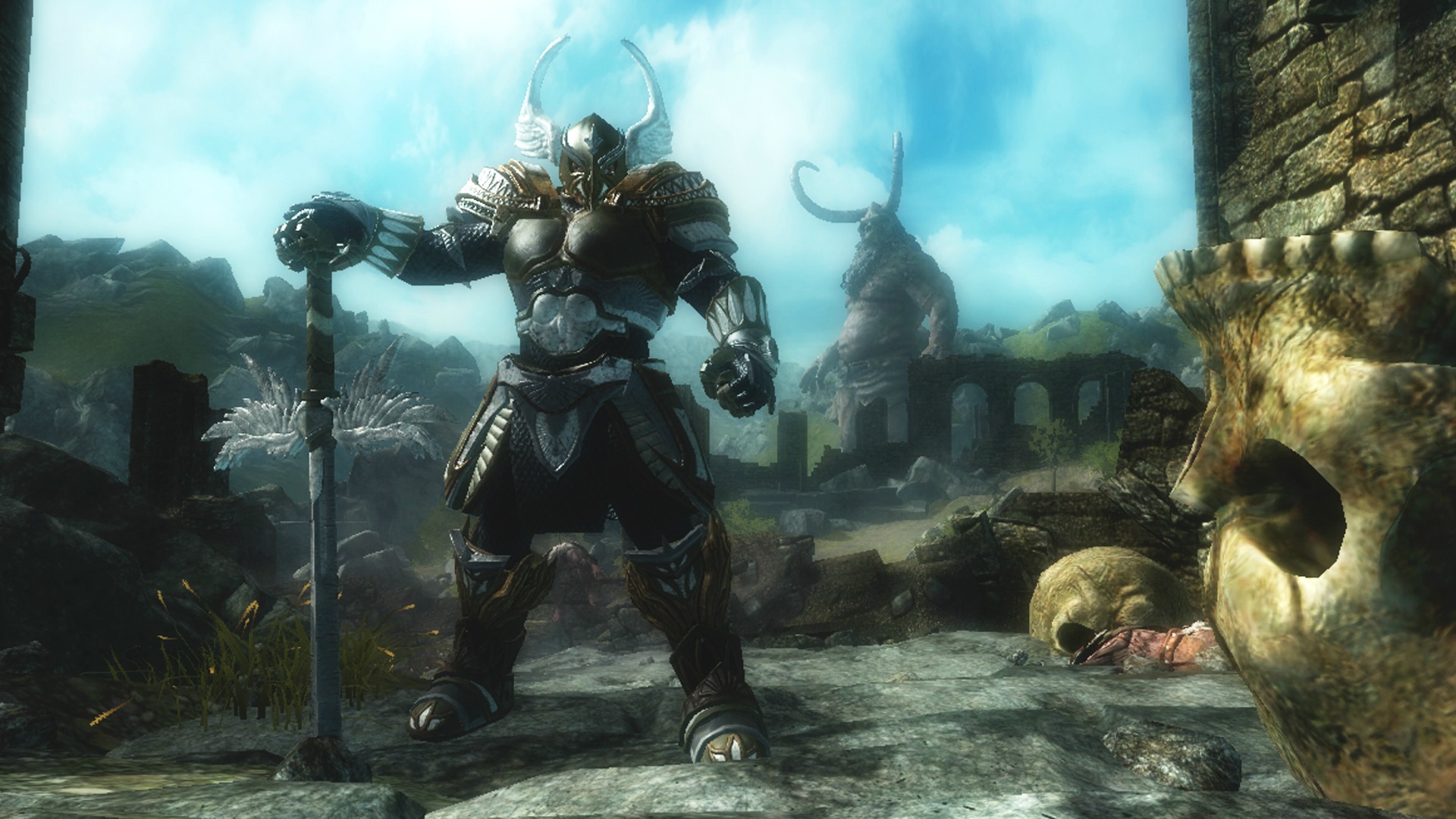 In terms of its environments, the game introduces you to a number of very interesting theme-oriented locales which greatly add to the nomadic, oversized scale of the world itself.  You play as a Caos warrior, a champion of one of three gods (light, void and dark).   As a champion, you are essentially immortal, meaning that while it’s possible for enemies to take you down, you’ll simply spawn nearby, ready for battle.  Keep in mind though, there are other human players all around you, even some who will set curses / traps for you, so you have to be on your guard.  Additionally, each area that you free, and/or bring under the control of the god you serve, can be assaulted by other individuals as well.  Once one of your altars / shrines comes under attack a little dialogue box pops up asking you if you want to warp over to that location to stop them.  If you have a well-balanced / leveled character with a decent weapon (like myself, touting a powerful magic-infused skull-crushing hammer) dispatching these would-be thieves is no problem at all.  Naturally, it’s not just about wildly attacking at will, to become a successful Caos warrior you’ll also need to learn to block properly as well as take note of enemy attack patterns.  In other words, strategy plays an important role in this game, albeit it’s much more subtle in most cases.

When you start out, the level cap is relatively low and you don’t have as many emblems to power-up your character.  By “ascending” (retiring your present character in order to return to the chamber of the gods and start anew) you earn these emblems at the expense of most of your gathered items and the loss of a few levels of character progress.  All in all, it’s an excellent mechanic which creates a drive to push forward in order to achieve supremacy. 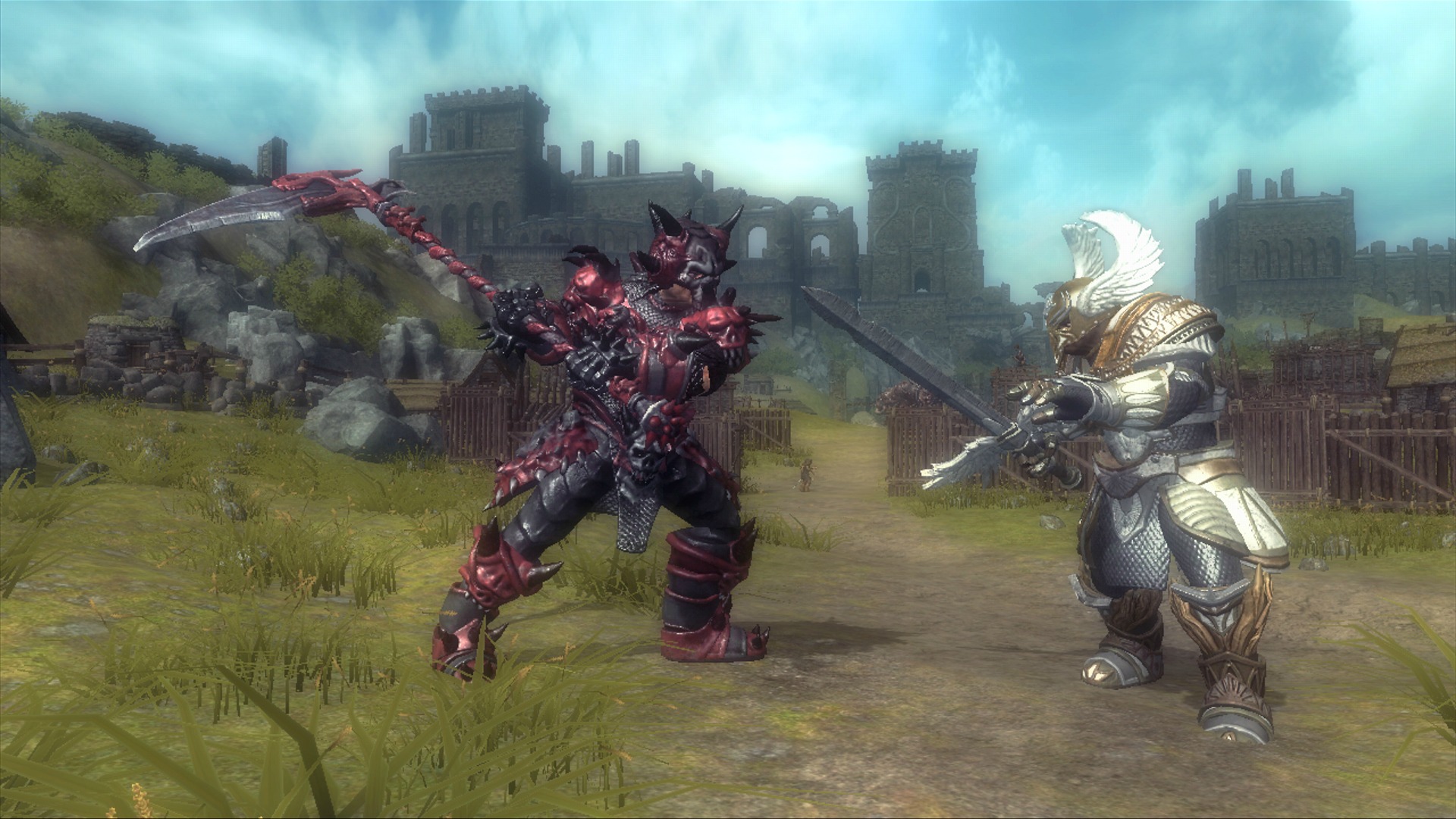 The game itself draws quite a bit of drama from the various scales of the in-game characters themselves.  For instance, at the bottom of the ladder, of an almost insect-like size, we have the humans, which basically exist to serve whomever is the most powerful.  Above them there are a number of enemies, gigantic by comparison to them, yet dwarfish when pitted against your Caos warrior.   Furthermore, there are enemies of comparable size as well as those which are a good 3-5 times bigger than your character.  Then of course there are the Titans – massive beings who lumber around and are extremely imposing.  Your goal of course is to bring these Titans down in the name of the god you choose to serve.  However, accomplishing that goal will require you to complete a series of challenging objectives which are delivered via what amounts to an RPG-on-rails-like format.  In short, it’s a fresh idea for a game that’s both entertaining and well-executed on all fronts.  The fact that there is a multiplayer element included only further sweetens things.