Games that put you behind the wheel come in two essential flavors: games that are about driving, and games that are about using your vehicle as a weapon or destructive force.  Pole Position is an early example of the former.  Grand Theft Auto and Carmageddon would fall into the latter category.  Unbounded is the Ridge Racer series taking a fairly monumental leap from the first category into the second.  This isn’t going to sit right with a lot of folks; they’re going to be mad at what Bugbear has done here.  The perception that the franchise has been lowered will probably be put forth.

My thought on that is, if you change the first two words of the title to something besides “Ridge” and “Racer,” a lot of the same people would (secretly or openly) enjoy playing this game.  Most likely they’ll still (secretly, not openly) enjoy Ridge Racer: Unbounded, even if they squint during the title sequence to make the letters run together into something possibly intelligible as words other than “Ridge” and “Racer.”  Why?  Because smashing cars and tearing around cities is completely fun, and RR: Unbounded is a solid game that executes this premise with polish and shine.

The only place in Unbounded lacking polish and shine is.its aesthetic, but that’s on purpose  If you’ve gotten used to the high-gloss, shiny-surface, brakelight-trail-fading-into-neon-night slickness of Ridge City, Shatter Bay will come as a grimy surprise.  The environment is rendered well, but is purposefully not beautiful and smooth.  Its pitted, pored, dirty, and disheveled.  This is OK.  You’re going to beat the crap out of it with your car anyway.  Ridge Racer: Unbounded isn’t about skillfully skirting obstacles to beat a time limit.  It’s about busting straight through them leaving a trail of destruction in your wake. 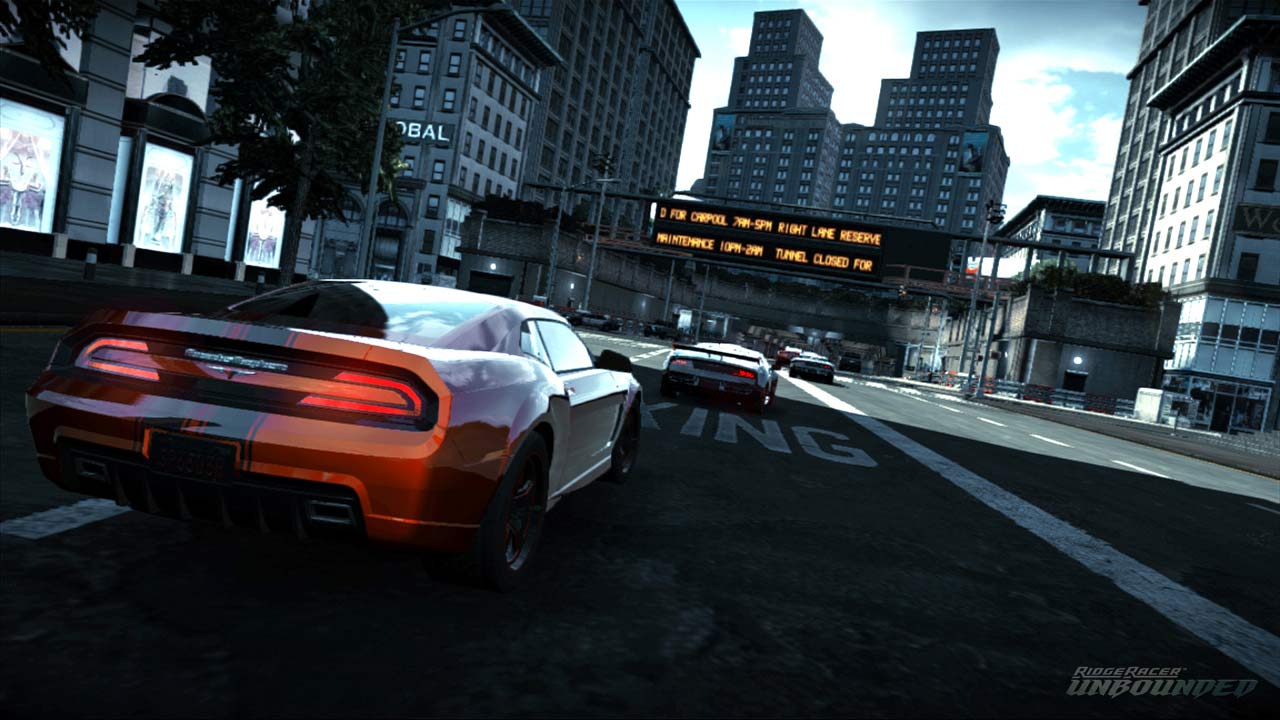 Though the control system is simpler and less temperamental than before, mastering advanced racing moves like the all-powerful drift will still be required, and that demands a certain amount of finesse.  The environment is heavily destructible, and your rides absorb (and cause) a significantly greater than normal amount of damage.  Rather than trying obsessively to shave seconds off a particular run, you’re going to be rewarded for forcefully remodeling the city.  A custom city editor is also part of the package, allowing players to set up their own courses to ram their vehicles around like a chain of collapsing dominoes.

All in all, Ridge Racer: Unbounded is a solid game that is such a huge departure from the rest of the line it’s a wonder they kept the name on it.  It’s basically a Bugbear game with the blanks filled in by Ridge Racer.  If you ignore the whole lineage issue, though, and just focus on whether the game itself is any good, its hard to imagine how one comes to the conclusion that there isn’t a lot of fun to be had with Unbounded.  How protective are you really going to be about the depth and artistic integrity of the Ridge Racer universe?  Dude, you’re the reason there are four Fast & Furious sequels and counting.  I thought you liked games about cars!