There’s no denying that Shadows of the Damned is a downright peculiar game. A somewhat deranged plot, atmospheric and weird visuals and an assortment of demons to destroy all make for a completely unique experience. If a game involving significant amounts of blood and gore, nudity and completely vulgar and immature joke after joke after joke after… you get the idea… then this is definitely a title to avoid. However if those elements don’t phase you then Shadows of the Damned could be just the thing for you.

You’ll take control of demon slayer Garcia Hotspur in this game, a man whose sole purpose in life is to put an end to those pesky corrupt souls that inhabit our world (and the world below). The plot of this ten hour campaign is based on the utterly insane girlfriend of Garcia, Paula, who has killed herself and been taken hostage by the so called lord of darkness, Fleming. Your job therefore is a rescue mission as you, teamed only with a floating skull named Johnson, seek to defeat the hordes of the underworld in your valiant attempt. Don’t expect deep and meaningful plot twists as you progress through the game, but there is enough of a story to be engrossing and to tie the other elements of gameplay together.

Shadows of the Damned is technically a third person shooter, though there are certainly elements of arcade shooting games stuffed into the package. The levels of the game are linear and, on the whole, will simply involve destroying wave after wave of demons with a choice of three weapons, a pistol, a shotgun and a machine-gun. As you progress onward your weapons will be vastly improved, with the ability to, for example, shoot mines instead of bullets from your pistol, or homing bullets from your shotgun.

The combat does become a little repetitive at times, with each new level essentially just presenting you with a new horde of enemies to shoot. Some camera issues don’t help this problem, as it is easy enough to be backed into a corner that will completely restrict your vision of those monsters seeking to destroy you. Fortunately some extra tactical elements to the fighting do make the game infinitely more playable, for example the creeping darkness encountered throughout that will cause you to steadily lose health. The darkness can always be countered by setting a conveniently placed goat head on fire, but sometimes you will need to consider if a certain degree of darkness could aid you in a fight against a standard enemy or boss. Expect to die repeatedly as you do get to grips with these combat tactics.

The designers of Shadows of the Damned have managed to combine effective graphics with magnificent music and sound effects to create what is an incredibly atmospheric experience. As you progress through the levels of the game you’ll encounter a range of different scenes, from Victorian houses to farming villages, all sufficiently gloomy enough to represent the shadowy land that you now temporarily inhabit. Although the animations of certain characters do appear stunted at times, this doesn’t really detract from the overall feeling of eeriness that is sure to make your skin crawl as you seek out demons to neutralise.

Shadows of the Damned won’t be for everyone. An excessive infatuation with dodgy jokes can prove tiring, and a few small niggles here and there may put off a few prospective customers. If you can look past those things to the game itself though, you are likely to find yourself absorbed into a truly great game that features no dull moments at all. 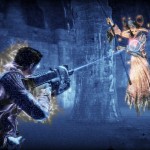 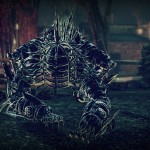 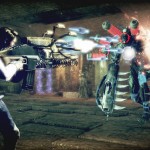 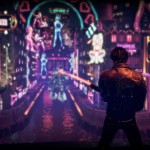