Is Bulletstorm for Xbox 360 Just Another Foul-Mouthed Shooter Game?

While Bulletstorm for Xbox 360 may be deemed obscene and even vulgar in nature, it’s also a welcome breath of fresh air.  If you are looking for a unique shooting game that can add humor while allowing you to cause a little mayhem, this is it!  Bulletstorm is intelligent, creative, exploding with personality and it offers fathoms of depth.  What could be better than a game that allows you to kill in like 100 different ways and offers a spectacular narration?

While you may assume this game is nothing more than F-bombs, middle fingers and a whole lot of massive weapons, you actually are gifted a story underneath it all!  The creators stepped outside the box to bring fun to chaos and create a story you can certainly get attached to.  If that’s not enough, the characters are about as real as they can get, all with their own personalities and preferred way of showing and dealing with emotion.

Bulletstorm for Xbox 360 is created around a ruthless, hot-tempered, rude and even corrupt group of Black Ops soldiers who were distorted by a General to use for evil purposes.  When they find themselves stranded on a planet seeking revenge, a whole lot of obstacles get in their way. 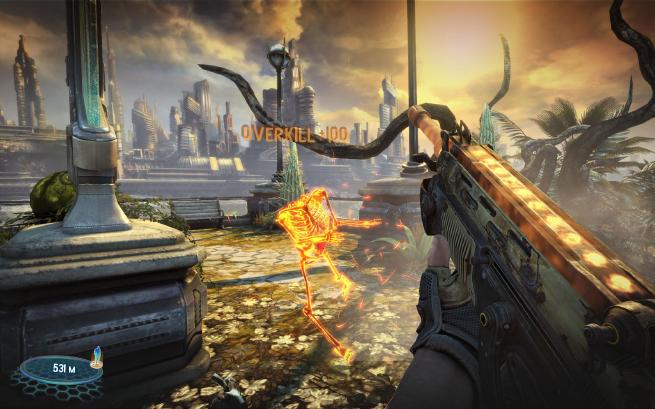 The planet Stygia once was a tourist spot, like the Las Vegas of space so people would travel there from Earth for vacation.  It was created to essentially fulfill anyone’s fantasy but a radiation storm caused evacuation.  Unfortunately, people were left behind including all of the prisoners.  Radiation has mutated everything and the people are savages, only concerned with survival.  This is the planet you’ve crashed on!

Disposing of the mutant’s is a bloody and violent affair.  At first, you’ll rely a lot on the bullet kick which is a solid boot to the face of your enemy which sends them flying in slow motion.  Hey, if you feel the need, pull them back in with your leash and then kick them again if you didn’t get your point across the first time.

As your collection of guns grows, you’ll be rewarded with much more gruesome finishes.  You can even rip the insides of your enemies to ribbons and not the pretty kind that reminds you of Christmas morning! 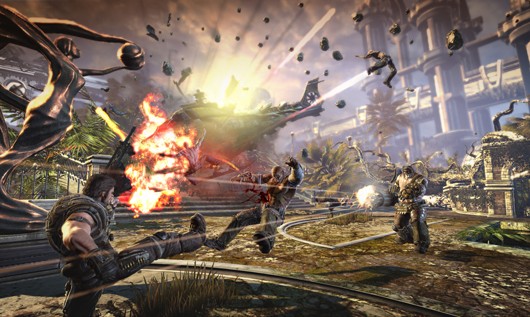 You will constantly scroll through your database to see what you’re missing in your skill set.  While you can complete the campaign even if this is ignored, you’ll ruin the experience.  Bulletstorm is meant to earn points from your skills so you can go to the Drop Shop, a place that is definitely to your advantage to frequent often.

It is absolutely ludicrous that some gamers are whining about the graphics.  Really?  What more do people want?  The characters are nearly human and the attention to detail is flawless.  The only issue with graphics is that despite the gorgeous, scenery, Bulletstorm can suffer from the occasional texture pop-in and during manic sections there can be considerable drops in the frame-rate.  However, with how much is going on in the constant chaos, it’s nearly impossible to become concerned with these minor flaws.

People Can Fly developed a game with depth.  Nothing about the graphics can be considered an afterthought.

Bulletstorm for Xbox manages to separate itself from other stereotypical foul-mouthed action games by providing you with a real story and characters that you will love and hate.  The importance of creativity is prevalent and the homicidal toys deliver the garnishes that you need to label this a truly spectacular game.