I don’t want to knock Grand Slam Tennis 2 too hard.  It’s a solid game with a lot going for it.  It’s also the only game that lets you play at all four grand slam venues, so everyone in the UK will automatically buy it on principle (seriously, how is this the only tennis game that lets you go to Wimbledon?).  It’s very customizable, and in many ways is designed to reshape itself into whatever kind of tennis game you want, whether that be an exacting and realistic simulation or an easy, jump-in-and-whack-balls video game.  That said, in doing so it’s lost some of the cohesiveness that came with the cartoony, why-so-serious style of GST1.  And the career mode has some crippling mistakes that prevent this game from being more than a middleweight tennis title. 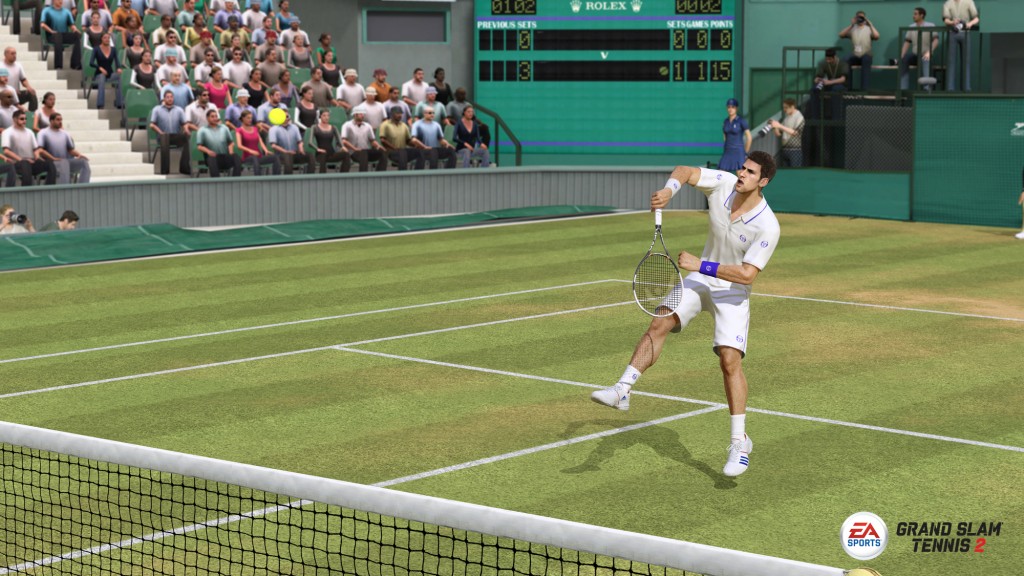 One of the strongest features of GST2 to is the new “Total Racket Control” scheme.  I like this because you can turn it off.  That’s not a snide remark – if you want delicate and unsurpassed interaction with your player’s fictional racket, this is the crème de la crème.  It’s actually not all that hard to get used to, and there’s a helpful training course that introduces it before you start playing matches.  You use the right control stick for swing mechanics, and can double up with a SixAxis or navigation controller to give you unprecedented input over angle, pitch, curve, and a bunch of other aspects of smacking a thing with another, flatter thing, which probably have technical terms I don’t know about.  If you have a motion controller like the Kinect, you can opt for that instead, and despite a few minor delay issues, it’ll serve you (ha ha, get it?) quite well.  When you do serve, instead of the usual toss-and-whack, you start by allotting energy to the the power of your serve with a button press.  Then, you watch the progress of a little pip as it travels over a bell-curve which is supposed to represent a bunch of different variables that determine when to swing for maximum effect.  I don’t know what it all means, but it has the effect of changing the control feel for players with different stats.  That’s especially important in a game where the roster of real players is uncommonly deep, and each actual person is rendered with readily apparent fidelity of detail, right down to the grunts they make on a backhand and the direction they like to throw a racket during a temper tantrum.

And, if you don’t give a crap about all that and just want to hit a ball by pushing a button, the game lets you disable all the newfangled junk and do that too.  I like the TRC better, but thought it extremely egalitarian of the designers to give me a change to sidestep all their hard and potentially too-frustrating-to-learn-right-now work, in the name of letting people jump in and start playing. 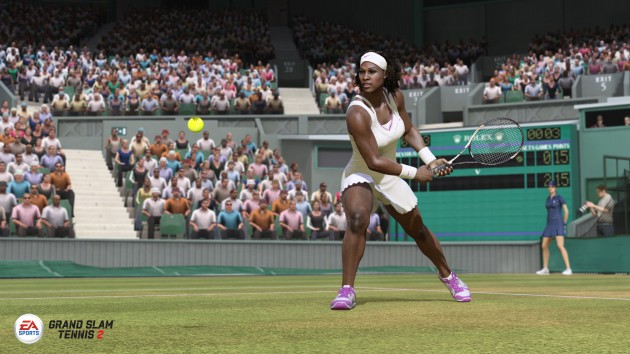 The career mode is the most frustrating aspect.  It’s frustrating because some of it is done so well, and yet it’s deeply flawed in a way that almost ruins everything that was done right.  The positive aspects are many, like the many mini-challenges which goad you into improving your skills by offering rewards for not just winning, but winning well (like finishing a match with zero unforced errors).  The one-two punch that almost kills it is the lack of mode variety, coupled with an insane difficulty curve.

The mode spans a ten-year career, and each year is broken up into quarters for each Grand Slam tournament.  You get to participate in two extra events in each quarter – but there are only eight of them total, so you run out of new things to see and do between the Slams fairly quickly.  But by far the worst aspect is that the difficulty of the matches progresses in a linear, fixed path that doesn’t take your player’s skill – or your own skill as a player – into account.  In the first year, you start at the “Rookie” level, which is pathetically easy.  It’s not bad to begin a campaign at a slow pace, but since we’re pretending to be world-class tennis masters playing in the world’s most challenging tournaments, it suspends my disbelief a little bit to knock my opponents down like flies, match after match, outdoing every player in history with tournaments and accolades won in my first two years – and then getting my ass handed to me at the beginning of my third, because the game decided it was time for it to get harder. If you like tennis video games then you might want to checkout Tennis Betting Online, which offers tennis betting tips.