Final Fantasy XIII was a polarizing game. Some people really liked it, and to my mind there’s a lot that was conceivably likeable, despite the many flaws – the most egregious of which, it seems universally agreed, was how strictly linear a game it was, which runs contrary to most of what has made Final Fantasy the legendary franchise that it is. So I might as well start out by saying that FFXIII-2 follows much less of a straight-arrow path. In fact, there’s so much time travel and world-jumping, you’d be hard-pressed to draw a diagram of the plot without tying your own fingers into some kind of moebius knot.

If you were mostly happy with FFXIII, just understandably let down by the rigid linearity of the plot, you’ll most likely consider XIII-2 an improvement. On the other hand, if you hated XIII to its core, there’s not a lot about the latest sequel you can rejoice in. The main characters and their fundamental dilemma all stem from the previous game; arguably, XIII-2 puts the weaker characters front and center, which makes for an ambivalent playing experience. The most intriguing personality is probably the villain Caius, but even he is sidelined for most of the duration. There really isn’t any point in decrying any of the minor personalities, affected dialogue, and melodrama that has infected the Final Fantasy series. The overly precious sidekicks and single-tear-eliciting mournful soliloquies will get on your nerves now and then, but this is just what Final Fantasy has become, so until Square/Enix decides on a Nolanesque total reboot of the series, we all know what we’re getting into when we pick up a Final Fantasy title. No sense in complaining that the X-Men have just too many weird people with superpowers – there are plenty of other comic books if that’s not your cup of tea.

XIII’s role-based battle system makes another appearance here; you control only your main character and select one of a handful of postures for your teammates to take during combat, which the AI does a fairly earnest job of managing. Eidelions are gone, but you gain the ability to include monsters in your party. It’s something of a lonely game, because for most of it, it’s just you (Serah, sister of the last game’s leading lady) and your affable pal Noel, jumping around space and time with a random monster in two to help you beat up on your foes wherever they spawn. The plot is difficult to describe any more than I have without being both long-winded and spoilery; basically, Serah is the only one who realizes that FFXIII’s protagonist Lightning is trapped in some kind of limbo dimension, and therefore the only one who can do anything about it. It’s somewhat confusing, but as with most plots involving time travel, it works best if you don’t take it too seriously and just try to enjoy the weirdness – and at times, it manages to be downright ethereal, eerie, and even touching. 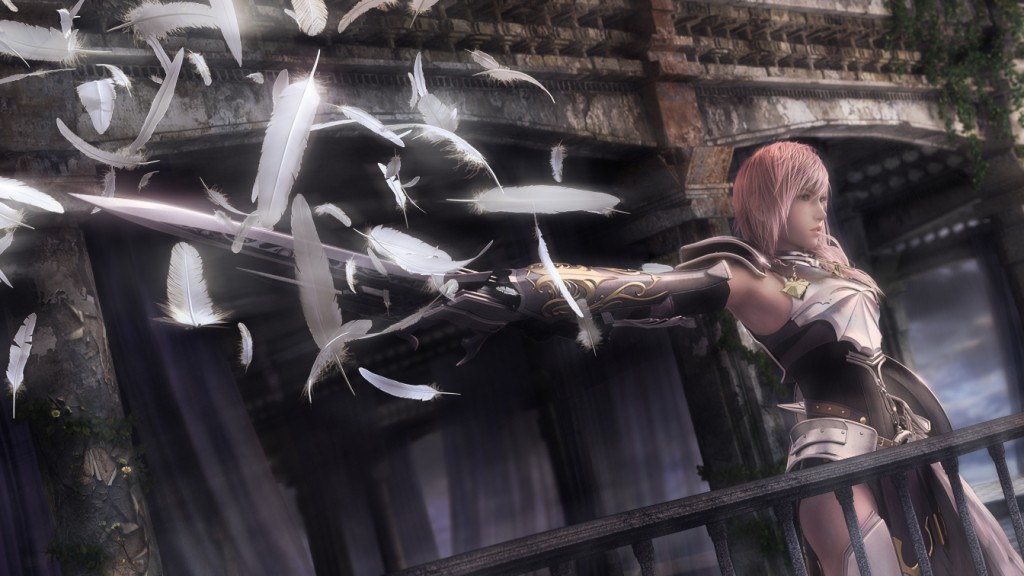 My main complaint with the combat in this game is how easy it is, right up until the end. It’s a short game despite the many side-quests; if you’re like me, and treat a new Final Fantasy game like a big Ziploc bag full of crack, you can finish the whole thing in one sleepless day-and-a-half or so strung-out sitting. (The best way, really.) Right up until the final chapter, you might not even worry about saving, provided you’re even remotely conscientious about working your characters up. And then, all of a sudden, you’ll be reloading a lot, because the last couple fights are just hard as heck. It’s kind of a rude awakening, and I always view games that develop these sudden hiccups of combat difficulty as attempting to compensate at the last minute for letting you win all those times before. To my mind, that borders on rude.

How are you going to pitch me softballs for an hour and then foul me out with a line-drive to the left temple? That’s just not right. There are some little nuggets of goodness that will please any Final Fantasy fan, like the return of (real) Chocobos, the kind you can ride and stuff. Even bringing back side-quests, as trivial and simple as they often are, feels like a return to form after the Nazi-like death-grip of control exhibited by XIII-2’s predecessor. But the most reliable metric for determining whether you’ll like this Final Fantasy is still it’s older, much-loathed brother. If you thought it was an unspeakable abomination, best to just duck back under the covers and pretend anything Final Fantasy with the suffix “13” didn’t happen, like the missing floor on a building designed by as a superstitious architect. If, on the other hand, you saw what they were trying to do there, you might find that XIII-2 hits a bit closer to the mark, and is, at very least, a step back in the right direction.