If you play on Xbox Live, you need a good headset, because the whole point of gaming with other people is to talk vicious, vile trash about them from the safety of you own home.  But, I hear you ask, wherever can I find a headset that will 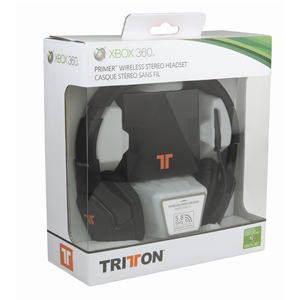 clearly communicate my astringent insights about stonerboiXX099135’s family, pets, and lifestyle, while at the same time freeing me of frustrating entanglements involving cords and wires – and at a price a lowly peon such as my wretched self can afford?  Is such a device forever consigned to the realm of fantasy?  No, not really.  There’s the Tritton Primer Wireless Stereo Headset.  Any more questions?Well, let’s start with the headset’s numerous good features.  Wireless headsets generally don’t come cheap, and one of the nicest things about the Tritton Primer is that the price (around $100) seems relatively reasonable.  It’s the only wireless headset with the official Xbox360 brand attached, so you can rest assured that The Company has signed off on this particular piece of hardware, if such things are important to you.  The sound quality is good in the main, and the 40mm drivers put out sufficient volume to satisfy the ears of any but the most degenerate screamo/deathmetal addict.  When you first unpack the Tritton, you’ll see a scarily large manual, which fortunately is not actually necessary for setting up your headset.  I’m not sure why it’s so thick; to be honest, I didn’t even open it.  Maybe they wanted to provide extremely detailed technical information, or the same set of obvious setup instructions in every language known to man.  Either way, points to them for completion – for the manual, and for providing all necessary cables and components (even a pair of AA batteries), and not making me run out to Best Buy like some kind of trained monkey for their own amusement.  I think my favorite feature of the Tritton is the range; working on the 5.8Ghz band, the box claims 33 feet, but I’d wager in practice I get even more, as I can stumble drunkenly around the entire first floor of my house and even some of the second while maintaining reception.  Another nice touch is that when you turn off your Xbox, the headset senses this and powers itself off to conserve batteries.

There are, however, a couple of not-so-nice drawbacks; to me, none of them are dealbreakers, just areas where you can imagine a little more foresight in design could have delivered a 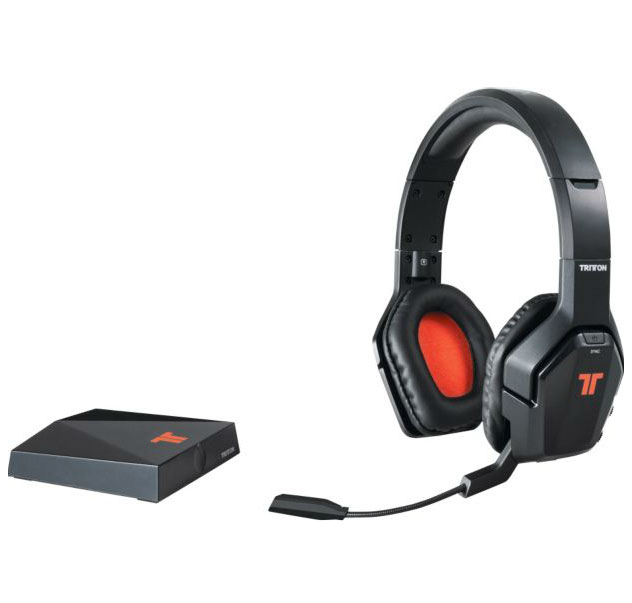 product in the same price range that isn’t missing these features.  For one, it can’t interface with the Xbox360 chatpad.  I’m not a huge fan of the chatpad – it’s a nice idea, but in practice it feels kind of clunky and awkward, and makes the controller just heavy enough that my weak, linguine-like arm muscles sag and complain under its oppressive heft.  If you could actually use your thumbs to type on that thing, it would be a different story, but I’ve never seen anyone successfully apply their disturbingly preternatural Blackberry-thumb-wizardry to that weird little keyboard….whatever, this isn’t a review of the chatpad.  If you likes to has your chatpadz and cheezburgerz, you’ll find it pretty obnoxious that your brand new “no pizza money this month” headset won’t work with your favorite blisterpack.  Boo.  Also, for a hundred smackers, I could use a little more bass out of these cans.  I tend to be really happy with the quality of voice chats on the Tritton, but my in-game blowings-up don’t have quite the “oomph” on the low end that make them extra-satisfying.  I’ve got a set of Sony PCR-270s that I bought off Amazon for like sixty bucks, and I tend to use that as my baseline for measuring headphone quality, in that anything that costs more had better sound at least as good.  I know, this is wireless, this is a headset with mic, yadda yadda, but you know what?  I can take my reasonably-priced headphones, and then take a cheap-ass desktop microphone, and with the magic of duct-tape, construct myself a perfectly serviceable DIY headset with great sound quality.  And it won’t be wireless, but I’ll be forty bucks richer than you, and if I need to get up and pee while I’m playing Modern Warfare 3, that’s what the plastic soda bottle under the couch is for.  You know what I’m saying?  I can tell by your face that you don’t.  Oh.  Well this is just awkward.